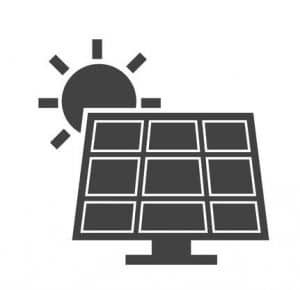 Interestingly, the days of five foot long, glass-enclosed solar panels mounted on top of van roofs and homes and other places might be numbered… Did you know that miniaturization efforts are underway to the point where the solar panels of the future will be smaller and– get this– flexible? That’s right– there’s the potential to fold up tiny solar panels that still work well. Using high-efficiency silicon, developers are able to put the technology into smaller, more flexible forms than previously imagined. For instance, “solar panels” have the potential to be incorporated into wearable clothing! Think of the possibilities– your clothing, worn outside in the sun, may one day charge your smartphone device wirelessly.

Traditional solar panels are crystalline. You can’t bend them or else they’ll break. Future solar panels, however, are likely to be bendable, making them much more convenient for a variety of uses.

In the coming years, it’s entirely possible that people will be using “new form” solar power in order to charge and use their devices. Indeed, this improved technology could literally reshape the way people live, work, play and function in daily life. The future for solar power shows much promise.

If you have any questions about solar panels or the future of solar panels, contact GR Solar Solutions today.