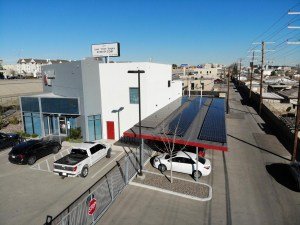 Fossil fuels include coal, oil, and natural gas. They were all formed long, long ago– hence the name fossil fuels. Eventually, they could all “run out” since they all have a finite supply. If the world needs to keep running on energy, and fossil fuels are no longer available to power our cities, then what? Obviously, the sun isn’t going to stop shining anytime soon. Therefore, solar power is the kind of thing society needs to utilize more and more. Energy from the sun is clean and increasingly efficient.

Scientists have been hard at work trying to make solar cells more efficient. Recently, they’ve started testing new kinds of materials that would be more efficient than today’s silicon energy cells. The new materials are known as HOIPs, which stands for Hybrid Organic-Inorganic Perovskites. Solar cells built with HOIPs can harvest energy from the sun even when their crystals have defects. That’s why they’re emerging as the new forerunner for the development of future solar energy cells.

Currently, most solar cells use thin layers of silicon to harness the sun’s energy. In order to work properly, these cells must have a purity of 99.999 percent. Any defect in their crystalline structure messes with their ability to function as intended. HOIPs can work well even with crystal defects. They’re also cheaper to produce and can be produced on a large scale. This bodes well for the solar power industry.

Ultimately, HOIPs have the potential to double the efficiency of solar cells.

Now’s as good a time as any to switch to solar energy for your residential or commercial energy needs. Solar power is already becoming a viable alternative to fossil fuels, and it’s only going to get more efficient in the years to come. As a renewable energy, solar is environmentally friendly and affordable. Contact Solar Solutions at 915-581-0461 to discuss solar energy panels: how they work, how they’ll benefit you, and how you can get them installed at your place.